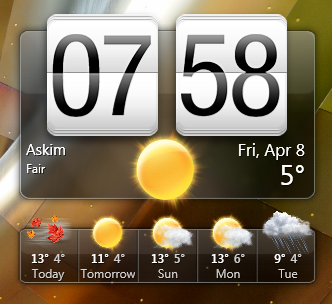 Remember I told you about the HTC Home weather gadget (Here) a while back? HTC Home is a Desktop Gadget developed to look like the weather and clock gadget found on the HTC phones. Last time I wrote about it, version 2 was still in Beta. I recently decided to check back with the developers and found that they have recently released version 2.4.

The New and improved

Where the 2.0 beta promised more gadgets and functionality, this version delivers. The weather gadget now comes bundled with 4 free weather providers, and several skin options (about 30 skins to choose from). But HTC Home does more.

One of the cool features added is the option to let the Weather Widget change your desktop- or widget background (or both) to suit the weather outside. But if you don’t like that sort of thing it’s not on by default.

The interface is about the same as before, only improved. The settings can now be accessed from any widget running, and it’s much more intuitive. Even if you’ve never used the HTC Home Gadget before it shouldn’t take your more than a few minutes to familiarize.

Only thing annoying me is the taskbar icon. The taskbar icon shows you the weather directly in your taskbar. To me it’s just a feature which luckily may be switched off entirely. I’m not that depended on knowing the weather outside all the time. If they could put it in the tray instead of the taskbar I might be more willing to keep it on.

In addition to the Weather’n'Clock widget, you also get a standalone analogue Clock (which is perfect to put on that secondary monitor), a RSS News widget (which can be download most RSS-feeds), and my new favourite; Image Rotator. 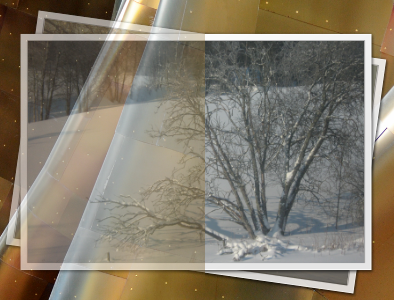 The Image Rotator is an improved version of the original one, that comes with the Windows Desktop Gadgets. The improved part means you can set it up to suit your images.

As before, every widget support transparency which can be set to almost 100% when out of focus. Then, when you hover over a widget, it fades in, smoothly.

So what are you waiting for ? Go download it