There were a number of surprise benefits I found upon making the conversion to Windows Media Center.

They don’t hype this much in the Microsoft literature on WMC, but I find the switch from 6 remote controls to just 1 a huge benefit. No more flailing around to set the TV to the right input, and the DVR to the right mode, and Sky box to the right channel etc. etc. It’s all right there on my new remote best friend.

The “Before” and “After” shots are below. 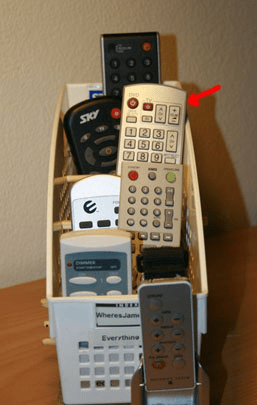 The next logical extension of this change is that you no longer need the boxes that the remotes were meant to control.

I’ve retired a couple of DVRs, several DVD players, a video switcher and an audio switcher. Along with the boxes go the cables, and the power supplies. Packing all that stuff up and hauling it out to the garage was completely cathartic.

Most multi-media enthusiasts will have had a collection of remote controls required by the mixture of the non-communicative devices that make up a home system. Some equipment manufacturers made a faint stab at interoperability (note the TV section of buttons on my DVD remote in the “before” picture) but you had to have just the right components for them to talk to each other.

A remote control will most likely be included with the TV tuner card along with an infra-red (IR) receiver. Depending on the model it may or may not be tailored for the Windows Media Center environment. If you’re using a set-top box you will most likely need a “IR Blaster” combo which will also usually include a remote control along with an IR Receiver and an IR Transmitter as seen below. 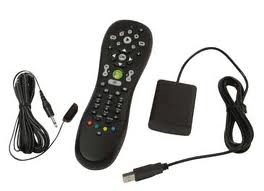 A Blaster is required by WMC in order to control the Sky box and pass the signal from the decoder box to the TV tuner card. I tried for weeks to find a work-around for this requirement (a universal or learning remote might have done just as well) but in the end the $60 Blaster kit turned out to be a pretty good investment as it fired up straight away.

The problem is that you can’t tune in the Sky channels on your PC card (at least I can’t).

So in order to get the Sky shows into your PC, you need to feed the video signal out of the Sky decoder into a compatible input on your PC TV card. This is perhaps the weakest link in the TV chain – at least in New Zealand – the standard Sky boxes only output a composite signal (which occupies the low rung on the TV signal hierarchy). The result is a noticeably degraded TV picture when viewing Sky channels.

A bit frustrating when the High Def “Free to Air” channels flow easily over an HDMI cable (the top rung) and can produce some stunning images on a high def TV.

There is an upgrade path from Sky that might produce better (digital) results but, of course, it’s considerably more expensive.

The next problem – since the Sky decoder doesn’t speak to your PC – is how to change channels. Both your Sky decoder and your PC need to know what’s going on and this is where the Blaster comes into play.

The Blaster unit consists of a small box (an IR receiver) that is located wherever you aim your remote (usually at the TV) and an IR transmitter bulb that is attached to the Sky decoder box.

During the WMC setup process you tell your system what kind of Sky box you have by firing a signal from the Sky remote into the receiver. Then, when you change channels using your WMC remote, the Blaster box transmits those signals to your PC via a USB cable. Your PC and WMC translate the signal from your WMC remote into a Sky signal and send an IR “Blast” to the IR transmitter bulb that you’ve pasted to the front of your Sky Decoder box. This changes the channel just as if the signal had come from the Sky remote control.

The Sky box changes channels and the picture is sent over the video cable to your TV card, and from there out to your TV. I was a bit surprised that the whole thing works flawlessly except for a bit of lag (latency) between button-press and picture-change. 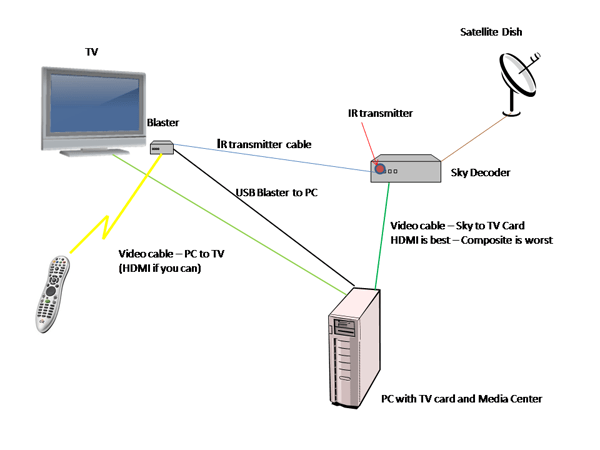 The software included with the TV tuner card hinted at the ability to alter the Blasters conversion table – it would be great to be able to customise the commands. There is no way (that I’ve discovered) to bring up the Sky program guide from the WMC remote – but you may remember from the post on the TV section that an alternate Electronic Program Guide is available with a bit of work making the native Sky guide redundant.

Being able to customise the remote is high up on my wish-list for WMC.

I’d love a “full-screen / window” toggle button, for example. But perhaps I’m being too picky.
The annotated picture below shows a popular model of the WMC remote control – the only difficulty thus far is remembering what the icons are for on the top 8 set of navigation buttons, but the judicious application of some text labels from a “Dymo” home labelling system solves the problem. 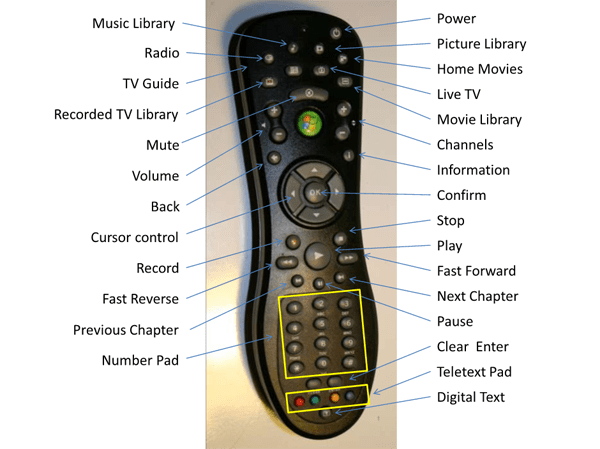 Here’s a close up of the HP model – they’ve kindly labelled their buttons for me. 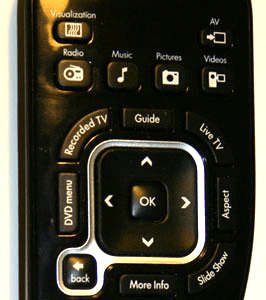 Transferring all of that home entertainment functionality to a single PC, to me, is what technology should be all about — making stuff available to the average Josephine — making life easier — making it more fun. The Windows Media Center remote control puts it all in the palm of your hand.

In our next episode we’ll look at the “Extenders” – pushing your media empire into the lounge and beyond.