Windows 7 Media Center – “Out Of The Box”

This is the first in a series of articles taking a detailed look at Windows Media Center (WMC) as offered in Windows 7. We’ll look at the main features as well as some of the minor goodies — we’ll point out a few short-comings and explain how some of these short-comings are overcome with some great 3rd party programs.

Our conclusion is that WMC provides an easy and attractive console for many of your digital entertainment sources – movies, TV, radio, music, photos – and more.  One remote control  drives the  system, it looks great, there are a host of plug-ins and add-ons to fill a few functionality gaps , and it’s free with the Windows 7 operating system.

Most do many of the same sorts of things. Some feature enhancements for collecting material from the Internet, others focus on movies etc.  After trialling many of these,  Windows Media Center came out the winner mainly for its ability to do the main jobs well, and allowing 3rd parties to take care of any shortcomings.

The “holy grail” for any media system is to have one box that does everything – movies, pictures, music, radio, TV Shows, news, weather, home videos, podcasts, etc. And all driven from a single remote control.

In the past, most media junkies would have had to make-do with home entertainment centres and a collection of different components, most of which didn’t talk to the others.  Watching TV was one set of components, listening to music was another (another 3 if your music collection included tape, CD, and vinyl), watching a movie yet another.   To keep track of it, some will have tried a parade of media cataloguing programs – spent hours plugging in discs and typing out descriptions, and to control it, many of us would have played with programmable remote control units that tried to combine our media sources into one unit.

Just recently, Media Center programs have come into their own, and although it’s still early days for this technology (there is still a fair amount of work required to set up of the system and fine tune it) there is reason to believe that while a bit of technical know-how is required to set up a good system today – a plug-and-play system for non-technical users can’t be too far off.

Out of the box, WMC does a pretty respectable job of organizing the media on your disc — Movies, music, pictures – it can handle most of the popular formats for each.  But when you combine the base system with a handful of 3rd party add-on packages the Windows Media Centre really starts to shine.

In this section we’ll run through the main components:

NOTE:  I live in New Zealand, so many of the regional references to resources like broadcast stations,  prices, and brands  etc.  won’t apply to your area.

If you collect movies on DVDs that are not copy-protected, you can copy those movies over to your hard drive making them  available through the WMC user interface. 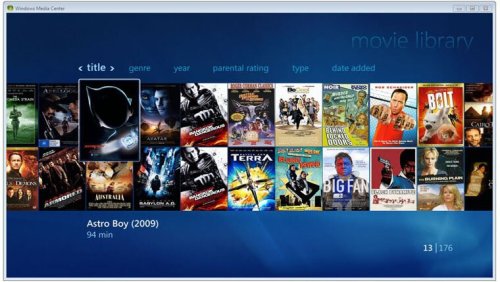 and if you allow WMC to collect information from the Internet, you will get back data about each title. This information is “meta-data” – that is “data about the data” – in this case,  information about the movies in your collection. For starters, as you can see from the screen shot above, you will get not only the Title, but the genre, the Production year, the Rating, the type of file ( “AVI” format or DVD format for example) and the date you added the title to your collection – you also get the cover art and “background” images (not shown, but we will discuss later).

You can then use this to sort your collection into smaller, more manageable groups making it easier to find the title you are after.
Everyone is familiar with the Internet Movie Database (IMDB) and some of their information makes its way into Media Center database, but primary source is “the Movie Database (TMDb)”. This user-generated free information includes titles, details, and “fan art” in a “wiki-like” fashion.

To include the TV section here is a bit misleading as in fact, you need a TV tuner card  to make use of the software . A TV tuner card turns the WMC into a superb “DVR” (Digital Video Recorder) — much like the “TiVo” or “My Sky” products now on the market. Out of the box, a properly configured setup should allow you to view and capture the Electronic Program Guide (“EPG”) from the 13 broadcast channels now transmitted by “FreeView”. TV from other sources, like Sky TV, can also be seen by passing the signal from the Sky Decoder Box, through the TV Tuner card. 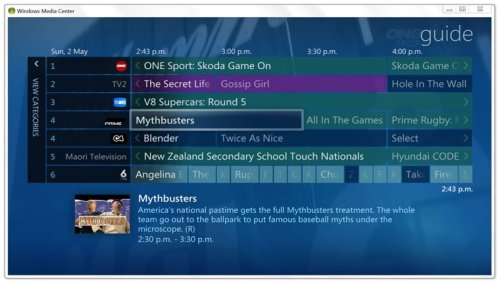 This is not the “bog-standard” TV guide in New Zealand – although this depth of data is very likely available in the US where broadcasters stream the information although with the programming free of charge.

Assuming your TV Tuner Card can also pick up radio stations, you can “preset” your local stations. 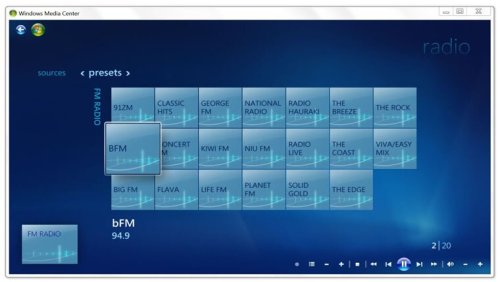 Chatter on the Internet suggests that most people would like to add station logos to replace the generic blue boxes, but no word as yet (that I could find) on when this feature might be available.

Your music collection can also be organized. Many users of Windows Media Player will be familiar with its ability to fetch song, album, songwriter, and musician information from fai.music.metaservice.microsoft.com for use in the WMP Library, and WMC uses the same technology.

In fact, the Media Player does the actual “playing” of the file — WMC acts as a front end. 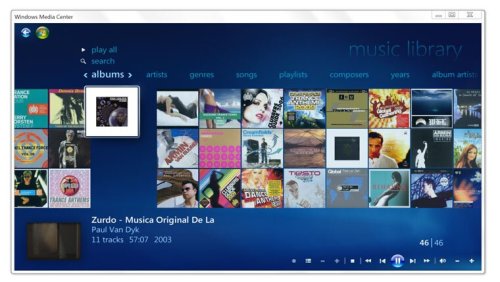 WMC can store your digital photo collection, but unlike commercial movies or albums; “metadata” about the photos must come largely from the user.

There are, however, a few modest tools (shown below) that add a bit of utility to what would otherwise be a very basic slide show program. What’s needed are a few extra tools like the simple editing tools offered in Picasa 3, DigiBookShelf, or Studio Line PhotoBasic3. Even just a link to your existing photo editor would be big help. 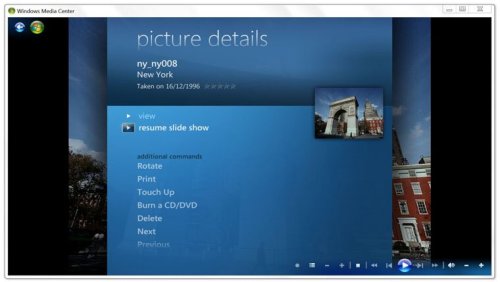 And, of course, the same applies to your home movies. Out of the box, WMC supports a number of common file formats.  A third-party plug-in will play the less established formats (like High Definition MKV videos).

What would a Windows system be without Solitaire? 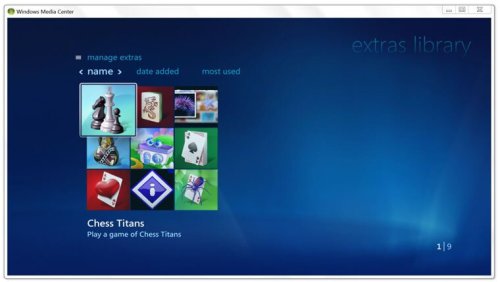 Some of the games have undergone considerable face-lifting from their 2-dimensional predecessors: 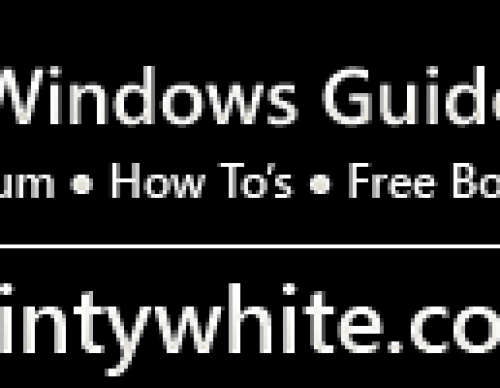 Out of the box, Windows Media Center has a lot to offer. Now that the world has become a digital playground, WMC provides a very nice Command and Control centre. When combined with a few 3rd party software add-ons, WMC becomes a top-flight Media Center package, well worth a second look for anyone interested in setting up a centralized digital entertainment hub.
All that’s required is a PC that will run Windows 7, (but of course, the beefier the better), a big screen TV, a TV Tuner card, a connect ion to the Internet, and a bit of time to set it all up.
And to keep the wife happy, you can buy one of the many “Extender” devices on the market today (priced in the $200 to $400 range in New Zealand) only a small box, perhaps the size of the paperback version of “War and Peace” is required. The extender hooks up to your TV and sound system and provides some of the facilities of the PC via a data link (wireless or hard-wired), a local hard drive, or a USB storage device.  Of course, it has its own remote.