My Initial Thoughts on Windows Seven

After a few hours exploring Windows 7, here is what I’ve found so far. Following are my likes and dislikes of the “standard” interface.

As you probably already know: if you don’t like something in Windows, you can usually change it to make it work the way you like. My thoughts focus on the default set up of Windows 7 M3. 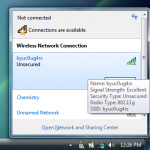 In a linux-style fashion, you can now select your wireless network from a pop-up list that appears when you click the wireless icon in the system tray. This saves you opening the wireless network list and then connecting. Now you can save your mouse by clicking less and getting what you want more quickly. This feature is a small one, but I really like it and am glad to see it in Windows. 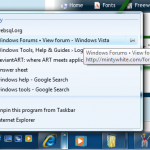 I really like the history tabs on the task bar. With any open window, you can click on the up arrow by the application icon and you can open recent files or windows you had open in that program. I haven’t used this feature properly yet, but I can see it being really useful. 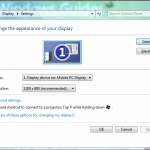 There seems to be better support for external displays. I really liked the added support that came with Windows Vista and I’m sure there will be more support in Windows 7. A lot of people use two displays and more people are using their laptops to present from, so this is a vital area to focus on. 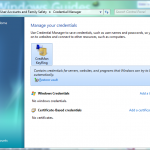 The Credential Manager will save your user names and passwords, so you can easily log on to websites and connect to other resources, such as computers. I’m not sure how many people will utilize this feature as I feel some people will not see the need or will have a portable alternative they can use between computers. However, this looks like it could be really useful, so we’ll see how it develops. 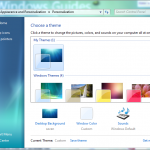 Windows 7 has much better support for themes. Everyone likes to customize in some way or another and this will open the door to a much easier way to express yourself on your computer. As of yet, I’m sure there aren’t many supported themes, so we’ll keep a close ear to this one! 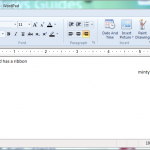 Paint and Wordpad have a ribbon interface, which makes use a lot easier. I hope, by now, you’ve had a chance to try Microsoft Office 2007 (if you are an Office user) and I also hope you are used to the interface. What do you think of the “ribbon” (extended) menu? I personally like it a lot and am happy to see the interface in other programs that are long overdue and update!

What I Dislike About Windows 7

There are a few things I dislike about the standard interface in Windows 7 as follows: 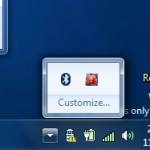 In earlier versions of Windows, you can click the left arrow and reveal the hidden icons on the system tray. In Windows 7, there is a popup menu that shows the hidden icons. I really don’t like this idea and I hope to see it eliminated in the final release of Windows 7. 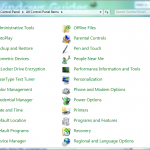 Talk about clutter! Check the screenshot on the right to see the horrific array of buttons that are revealed in the Control Panel after clicking view all icons. I don’t believe you should ever be offered this many options on any interface. I’d cut this option out and encourage users to utilize a search option. 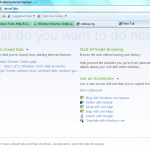 I’m not a fan of Internet Explorer and although there are some nice features included in IE8, they’re nothing too innovative. These features don’t make up for the screen (see on the left) with more options than I care to read. When you open a new tab, you’re given so many options that I just want to close IE8 and go back to Windows 3.11! 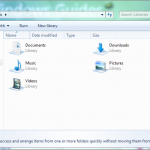 I’m sure I’ll come to love this interface, but right now I’m not convinced. I always hit WINKEY+E to open explorer in the default Computer view. Using this shortcut in Windows 7 opens the Library screen, which I don’t find particularly useful. I saved this one until last because I’m sure I’ll get used to it and make the most of this new feature.

Windows 7 is still in early development, so I hope the “problems” I listed above are addressed. The operating sytem boots pretty quickly; however, I haven’t benchmarked the boot time against Vista/Server 2008/XP yet. I look forward to future builds and I’m sure I’ll adopt Seven as quickly as I did with Vista.

Windows Seven should have much less compatability issues with hardware (compared to Vista), so hopefully this will aid with adoption of Microsoft’s new OS.

Do you agree with my likes and dislikes? What are your thoughts?