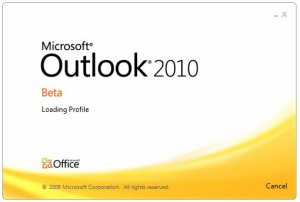 It’s here !! – well not officially – but the Beta i. I’ve been using MS Office 2010 since the Beta hit the market. After running it for about 3 months I can definitively say: What are you waiting for ? Okay, I get it you want to wait for the final release – but the thing is you really don’t have to.

In this first part I’m going to show you how to get started with Outlook 2010 and show you some of the newest and coolest features which I’ve come to love. This article and the upcoming ones will be subject to change as the Final Release becomes public, so bookmark this article already!

I will take for granted that you know how to install a program so I won’t get into detail about that. Just fire it up as you would do any other installation program. One big issue tho:

You cannot install MSO 2010 next to earlier versions. If you have an earlier version of Outlook (or MS Office) you won’t be allowed to install it, unless removing the old one first. Before you do – make sure you copy the Outlook Database File (PST) so you won’t lose your emails and contacts. See this Article.

Also:  The Beta comes with a feedback application which allows you to take screen dumps and post them as “High Five” or “Bad” to the developers. You will find the little utility in the taskbar, annoying, yet easily disabled at startup, tho it’s part of the package when running a beta – free of charge. 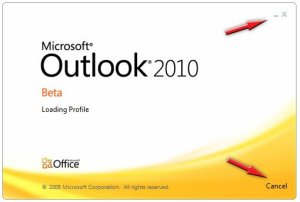 The first boot of a new program is always exciting – anything new up front ? There is one that quickly caught my attention: Microsoft added a couple of things to the Splash Screen that tells you Outlook is starting up:

In the upper right corner there are now Minimize and Close buttons – so you can hide the Splash Screen if it annoys you. The other new thing is… drum roll…: a Cancel button.

Yes! A Cancel Button – now this is nifty – haven’t you ever accidentally started the wrong Office Program from the programs list? Starting a program that you didn’t intend, is irritating and a waste of time( since you have to wait for it to boot before you can close it). Microsoft now gives you the opportunity to  Undo your action. Cool huh?

Okay, after that, the program boots up fine.

What else is new ?

One of the really new improvements in Outlook 2010 is the way it handles your PST-files. The PST-files is the database file where Outlook stores all your emails and contact details. And it used to get quite large, partly because it stored all accounts in one big file (or pile if you like). It also used take a lot of time making Outlook use your old PST-file or import data from it when re-installing the software. Not so anymore.

When you set up your accounts, Outlook 2010 now let you decide. Which Outlook pst-file would you like to use? Should all accounts be stored in one file or separate ones ? etc.

The interface had gone through a few changes, for the better if you ask me. Gone is the big ugly “start-button” up in the corner, replaced by a nicer small one. The messy category buttons which came as a big annoyance in the 2007 version  has gone through a small makeover and is now actually an improvement.

The Send and Receive Button is now placed in the Quick Access Menu so yo don’t have to click on the Send /Receive Menu every time you want to make Outlook Check for new emails.

The File Menu is no longer just a menu, it’s a new interface which has several new menus (and it’s orange!). Everything you need; add, delete, open, print and Options are now logically placed together.

The Home Menu also got a makeover and has a “Quick Access menu” of its own, called Quick Steps. QuickSteps is what we used Macro’s for –  ease our daily tasks. Office comes with a set of default Quick Steps, and you can easily make your own.  For example, if you like to move emails into a new folder after replying, you can make a Quick Step that Opens the Reply window and move the original email into the folder you have preset.

Another new feature  worth a mention is Auto Archive. This function let you automatically watch a folder and  archive its contents at a schedule time. Thus keeping your system running at peak performance.

Overall I’m impressed with the new look and feel. It’s a new and improved Outlook with many new features you’ll both come to love and hate, mostly love. In the following days and weeks I’ll walk you thoroughly through all you need to know. Let’s start at the beginning.

Comments are closed. Join the conversation at Windows Forums.