WINNERS of the NoteSync Competition 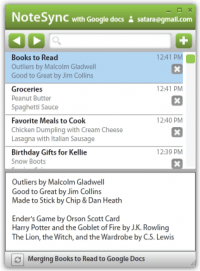 I’ve just received word from Brady White, and here are the winners of the upcoming full version of NoteSync !

There were literally tons of good suggestions for NoteSync. Some of which will be implemented in the release expected to hit the shelves in mid May.

There were some ideas that will take a bit longer to implement, but all of the winning suggestions will be a part of a future release.

The winners will receive their license as soon as NoteSync is released to the public.

Without further delay, Here are the result of the Brady White Votes:

@notesync i emailed already about this, but how about a shortcut to open up NoteSync? ie: Windows has a shortcut to Run (Windows+R) #wg
Comment: Scheduled for future release

@NoteSync #wg I would love to have some kind of labeling in Notesync, just like the labels in GDocs. And from there, exporting a folder.
Comment: – Labels / tags scheduled for future release

There you have it, yet again!
Participate in our contests and put your influence at work !