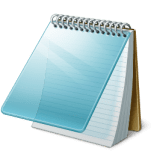 You must have figured it out by now, I love these little Quick-Tips. I also love to find new uses for “old” things. I recently re-discovered the LOG feature in Notepad, and this inspired me to dig out some more hidden features of this seemingly insignificant program that has been installed with every single Windows Version I can remember.

This time I’ll show you how to Hide important information inside a Notepad document.

It has been reported that this doesn’t work on FAT partitions, only NTFS.  But if it does – let me know.

Notepad is usually used to open and edit small text files or batch-files. What I’m sure you didn’t know is that it can also be used to safely (and securely) store important (read:Secret) information. The hidden text remains hidden from windows and any other resource unless you know it exist and what it is called.

To achieve this we create two notepad documents (text files) and hide one of them inside the other. One of the documents will remain visible, hiding the other one. Sounds Complicated ?

Anyone opening the file will only see the unimportant information that you typed in. Unless you know the Hidden Filename you will not be able to open the hidden part. So make sure it is something you definitively will remember.

Opening the hidden part is not that difficult, but nothing is – once you know the secret.

Well, I don’t know how usable this function is, but I am sure you wish you had known about this one a long time ago, am I right ?

One last tip:  If you like, you can also do this using the Command Line Tool (cmd.exe).